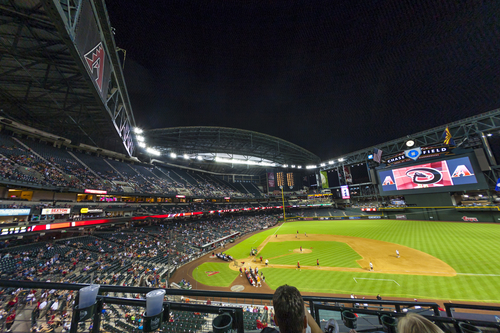 Every year, thousands of baseball fans pull out their favorite team’s gear and head south to Cactus League stadiums in Arizona for a memorable and unique spring training experience. Luckily, all 10 stadiums where 15 MLB teams play are located in the Phoenix metro area so no matter where you are staying, you can hire a reliable spring training limo service in AZ to take you to all ballgames you want to watch. If you are wondering where exactly spring training takes place, here you can find out more about Cactus League stadiums.

Opened in February 2009 and located in the West Valley, Camelback Ranch is the spring training home of the Chicago White Sox and Los Angeles Dodgers. The overall site encompasses 141 acres, including a three-acre lake, which makes it the biggest Cactus League complex.

The ballpark has a seating capacity of 13,000 – holding 10,000 stadium seats and 3,000 grass (berm) seats. In the name of the facility’s 10th anniversary, two 100-foot shade canopies were added along the first-base concourse and right-center field got a new 30-by-50 video board.

Goodyear Ballpark is the home of the Cleveland Indians and Cincinnati Reds. It opened in Goodyear in the West Valley in 2009. The stadium has a capacity of approximately 10,000, including 1,000 lawn seats, the right-field pavilion party deck for 500 people and six luxury suites. However, the games are not likely to sell out (unless the visiting team is extremely popular).

Previously known as Hohokam Park and the home of the Chicago Cubs, Hohokam Stadium was renovated to serve as the new spring training home of the Oakland Athletics in 2015. This 10,500-seat ballpark was named for the Hohokam people, who lived in the region from approximately AD 1 to the mid-15th century.

The stadium is located in Mesa in the East Valley. Down the line areas, outfield berm seating, shaded terrace level and the Cactus League’s biggest HD scoreboard offer one of the best spring training experiences.

Maryvale Baseball Park is the only Cactus League stadium located in the City of Phoenix – in the urban village of Maryvale. Opened in 1998, the ballpark is the home of the Milwaukee Brewers. It holds 10,000 fans – 7,000 in stadium plus 3,000 in large grass berm.

The concourse’s smart roof structure was built to cast shade over the upper half of the whole seating bowl. The trellised roof offers more than sun relief – it also protects visitors from foul balls. The roof permits light to pass through, creating a truly unique, unmatched open feel during a ballgame.

Peoria Stadium is located in Peoria, a major suburb of Phoenix, and it is part of the Peoria Sports Complex. Opened in 1994, this ballpark was the first two-team spring training facility. Both the San Diego Padres and the Seattle Mariners are its main tenants.

The stadium has the capacity to host more than 12,000 fans. In the fall, it is home of the Arizona Fall League. A cozy atmosphere and a range of in-house attractions, like the left-field pavilion that boasts lounge seating and has access to a bar and restaurant, make it one of the best Cactus League stadiums.

Cactus League stadiums: We will take you there!

Visiting from out of town for spring training? Don’t hesitate to contact AZLIMO.COM! We offer first-rate limo service in Arizona. Book our services and get the most efficient, comfortable, luxurious and safe professional transportation. Our courteous and experienced chauffeurs can get you anywhere in Phoenix and the surrounding area. We are just a call away!